Our Biases and Inclinations

By
CJay Engel
|
October 23, 2019
The editorial from the Spring Issue of the AL Magazine. Our very first editorial, with an optimism that there are many more to come! Get yours today.
AL Magazine

Our Biases and Inclinations

The editorial from the Spring Issue of the AL Magazine. Our very first editorial, with an optimism that there are many more to come! Get yours today. 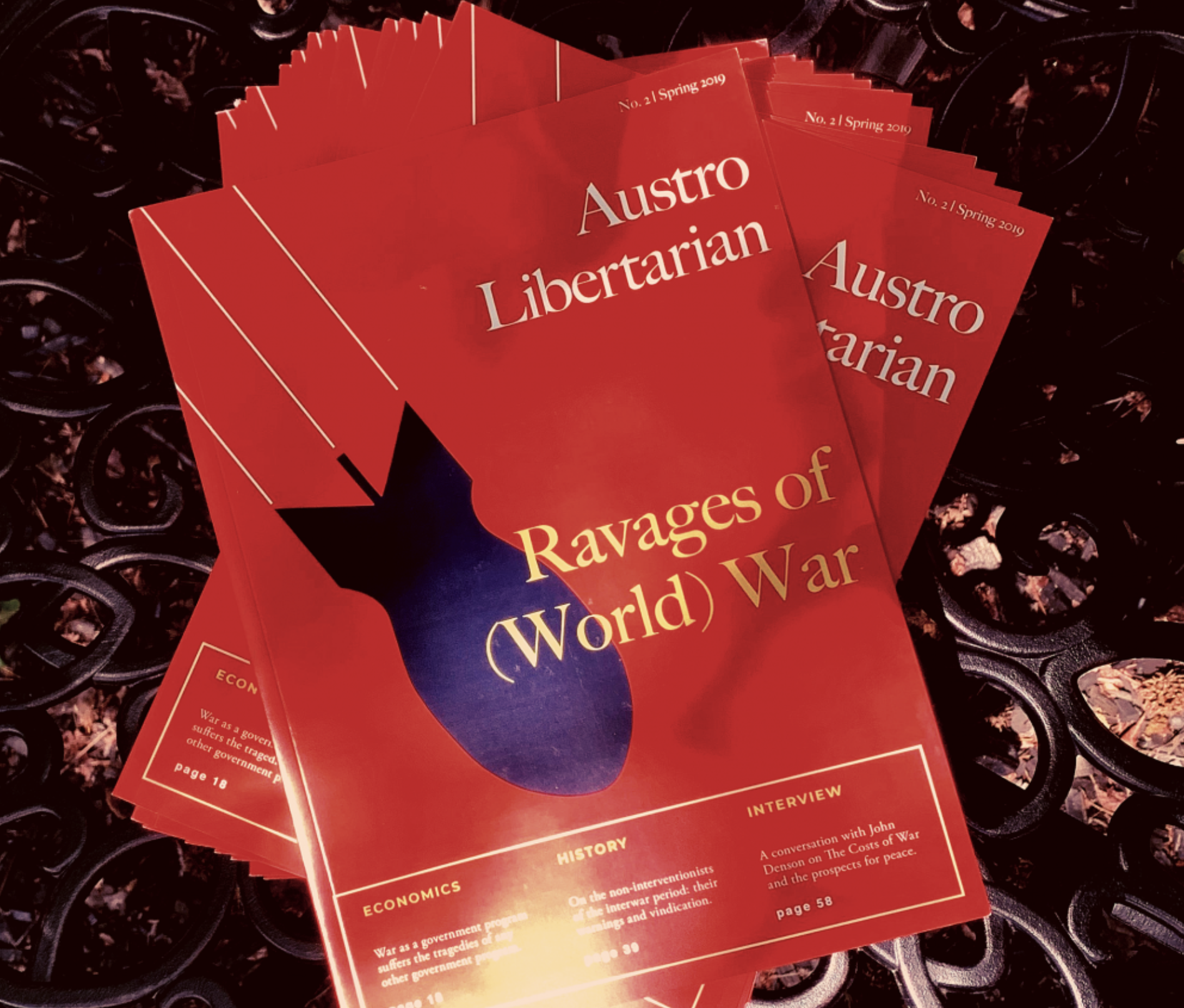 We live in the era of statism. As the historian Ralph Raico has put it, “this has been the century of the State — of the rise and hypertrophic growth of the welfare-warfare state.” While speaking of the twentieth century, how much more applicable are his words as we near the completion of the first quarter of the twenty-first?

Libertarians see liberty as the antithesis of statism. If liberty is defined as the absence of coercion, of the initiation of aggression, then the institutionalization of that coercion, which is a key component of the definition of the state, is a threat that constantly undermines the existence of liberty.

The Austro-Libertarian case against statism is a sort of one-two punch in that it not only speaks to issues of justice and ethics in statism (the “libertarian” political theory part), but it also speaks to issues of prosperity and economic development in statism (the “Austrian” economic theory part). The Austro-Libertarian, therefore, criticizes the state for constantly and inherently breaching the property rights of individuals (an ethical issue) and for constantly and inherently undermining the wealth creation that benefits all of society over time (an economic issue).

Surrounding these two pillars of state-criticism are issues related to sociology, epistemology, ethics, psychology, praxeology, historiography, and everything in between. And the existing literature supporting and developing the Austro-Libertarian edifice is quite extensive; we should never be interpreted as going intellectually rogue; we stand on the shoulders of giants, we need them, we learn from them, we seek to elaborate, with caution and care, their trailblazing advances.

In this light, this Austro-Libertarian publication has chosen a particular tradition, or formulation, of anti-statism. Our approach to economic theory is more clear than the increasingly fuzzy phrase of “libertarianism.” Austrian economics, especially in the Mengerian tradition of Ludwig von Mises and Eugen Bohm-Bawerk, is a priori and built on the logical derivations of the fundamental elements of human action; individuals employing means in order to fulfill their chosen and desired ends. We therefore reject any temptation to make economics a testable, empirical, aggregate, and model-based science.

Among the broad usage of libertarianism, there are those who define it in vague terms and worse, mischaracterize it for public consumption.  Thus, popular references to libertarianism as a moderate compromise of being “fiscally conservative and socially liberal” are tremendously unappealing to our mentality, demeanor, and aims. In our opinion, this bastardized version of libertarianism not only fails to do justice to the beauty and rigor of the libertarian tradition, but it also betrays more general social interests that we carry.

As human beings, not just libertarians, the editors and key team members of this publication also have a bias toward certain cultural elements. While libertarianism itself, being rationalistic and containing true propositions independent of cultural and social context, is neither “right nor left,” the social demeanor that we personally carry tends toward what might be considered an older “rightism.” Libertarianism, technically and purely defined, does not necessitate or obligate this position; but it represents our personal disposition. While there are no doubt healthy and productive disagreement and differences in each of us in this way, we nonetheless do not find attractive or tempting the stirring winds of social leftism.

We distrust the mob and the masses (Erik von Kuehnelt-Leddihn called this the “Menace of the Herd”) and therefore are attentive to the Jacobin-democratic language being employed by the new socialists. Further, we find no inherent problem with natural hierarchies based on individual differences and believe some cultural and social norms are more beneficial to civilization than others, though we reject any notion that these norms and hierarchies are by nature denied to, or are the exclusive property of, any single race or ethnicity.

We dissent from the obsession surrounding egalitarianism and the rising “political correctness” culture that swoons over diversity for diversity’s sake, that seeks to mandate multiculturalism in the misguided pursuit of homogeneity, and treats various “alternative” lifestyles as causes to be advanced. In this sense, we believe that libertarians as individuals can and should have biases toward cultural rightism, though we definitionally deny that libertarianism is itself rightism. Libertarianism as a doctrine is neither right nor left, for libertarianism is simply a certain body of propositions relating to the ethical legitimacy of coercion.

We formulate the relationship between libertarianism and cultural rightism as Hans Hoppe does: Conservatism (which tends to be “empiricistic, sociological, and descriptive”) focuses on “families, authority, communities, and social ranks” while Austro-Libertarianism (which is“rationalistic, philosophical, logical, and constructivist”) focuses on the “concepts of property, production, exchange, and contract.” And therefore the former is the “concretization” of the latter. Conservatism needs a theory and libertarianism has practical expressions –that is, a natural and physical order.

Movements of the nominal right have failed tremendously in our time. Pop-conservatism as a brand is in a sorry state. Not only do they consistently, through time, always cater to whatever yesterday’s leftism happens to be, they have also successfully conserved almost nothing at all over the last 150 years. If conservatism desires to return to a “moral and cultural normalcy,” it needs libertarianism’s consistent and defensible anti-statism.

We therefore combine, in a sweeping outlook on our times, the intellectual rigor of the Austro-Libertarian framework with a guiding spirit that is motivated by our love of Western civilization, the furtherance of our prosperity, and the strength and harmony of the social communities in which we voluntarily engage.