The Memification of Hans Hoppe

By
CJay Engel
|
October 23, 2019
May 8, 2019
On the cheapening of the contributions of Austro-Libertarianism's greatest intellectual benefactor.
Philosophy

The Memification of Hans Hoppe

On the cheapening of the contributions of Austro-Libertarianism's greatest intellectual benefactor. 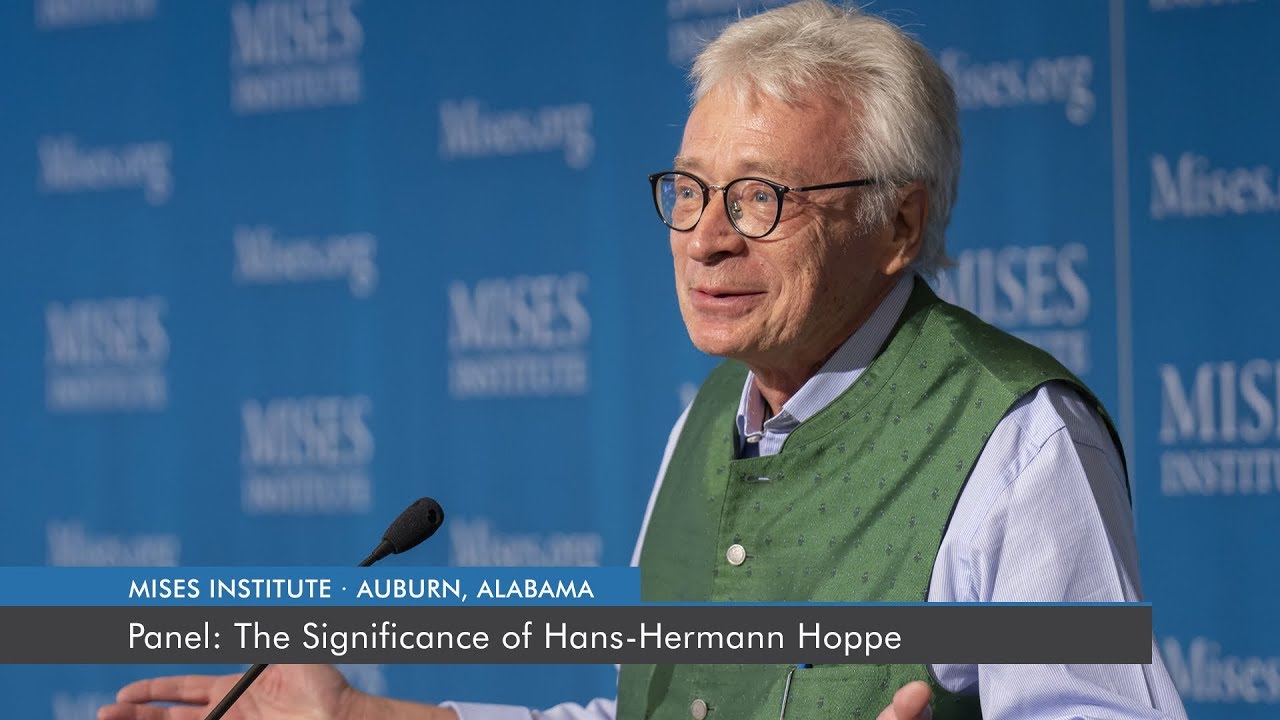 This website exists as a humble attempt to promote and explain the Misesian-Rothbardian edifice, to the extent that I understand it and am able to effectively communicate it. With the sole exception of these two intellectual giants, the most able and profound defender of the Austro-Libertarian tradition is, without doubt, their disciple and principled advocated Hans-Hermann Hoppe. You’ll notice everywhere on this site that he is included as the third leg in the tripod of Austro-Libertarian intellectual fathers.

One of the self-imposed responsibilities I take most seriously in the creation and promotion of all the content on this site is the careful and precise expression of the ideas of these three. Of course, I try to be honest and forthright in all that I do, in every representation of people I make, but since these three pillars of the Austro-Libertarian tradition are pillars in my own mind as well, it is out deep-seated respect and reverence for their contributions that I aim to promote their ideas accurately and with utmost quality.

In our time of cultural, political, and economic leftism, rampant throughout the West, Hans Hoppe is the recipient of numerous examples of misrepresentation, unfair dismissal, and gut-reaction rejections of the whole of his contributions based merely on one or two things his critics have been most appalled by. This is truly an outrage. The essays, the papers, the books, the speeches, the contributions produced by Hoppe are more than he is popularly known for if you merely read of him on Facebook.

This leads me to the title of the present article. Hoppe has become memified, which is not a word, but is in any case an accurate diagnoses for why the very mention of Hoppe brings up the stunning misrepresentation of the man who did more than anyone else to synthesize, exposit, and expand on the heroic work of Mises and Rothbard on behalf of Liberty.

Now, here comes the plot twist: I am going to express dissatisfaction about a memification which comes not from his opponents, but from his alleged fans— fans who have distorted the legacy of Hoppe. Of course, his hysterical opponents are typical of leftist reaction to his various principles in general. But it is my contention that the memification of Hoppe by those who emphasize a cheap and juvenile representation of his ideas are more disastrous when they come from those who call him their own hero. After all, they help to fuel the opponents.

The majority of Hoppe’s writings, which have been published in book form, include the following volumes: A Theory of Socialism and Capitalism; The Economics and Ethics of Private Property; The Great Fiction; and Democracy: The God that Failed.

He’s had independent and related essays published as standalone volumes including: Economic Science and the Austrian Method; A Short History of Man; From Aristocracy to Monarchy to Democracy; Natural Elites, Intellectuals, and the State; What Must be Done.

Now, the majority of his works focus on both the ethics and the economics of freedom, of a private property order, over against the ethics and economics of statism in all its forms. In attempting to draw out these principles, his has contributed to historical analysis, praxeology, legal theory, money and banking, the social impact of political systems, and so much more. He has not only elaborated on Misesian contributions to economics, but he has also extended the Rothbardian theory of libertarian ideals. Aside from succinctly and precisely restating and clarifying the ideas of his masters, he has also contributed new insights to our beloved doctrine; especially in epistemology, money and banking, and the ultimate justification for a radical private property-based libertarianism.

Additionally, he has paved the way for the application of praxeology to sociology, using Misesian principles to better understand the essence of community, the rise and fall of societies, and the pros and cons of various government arrangements, especially relating to the history-changing shift from a privately owned government (monarchy) to a publicly owned one (democracy).

Finally, he has synthesized and distilled, via the great inter-libertarian and inter-Austrian controversies of the 1960s-1990s, the tradition of Rothbard and Mises into original contributions which not only clarified our doctrines, but also cast them in new lights. One of the most lasting contributions that Hoppe has made in his various essays and journal articles is his emphasis on having a system of thought. Everything, from the ethics of private property to the praxeological aspects of human cooperation, fits together in one way or another; in a time of specialization and narrow concentrations of study, Hoppe's legacy will be in his ability to set everything in terms of a sweeping narrative. In this way, he has attempted-- successfully in my opinion-- to communicate the interrelationships between various fields of study.

This does not even scratch the surface of the tip of the iceberg.

Nevertheless, a handful of his fans have zoomed in specifically on a simple paragraph in Democracy: The God that Failed in which he puts forth a hypothetical private property arrangement— a covenant community— wherein this community faces challengers to the peace and well being of the community. The need for the disturbers of the peace to be removed, physically (for removal implies physical absence), is a prerequisite for the longevity of this covenant community. This idea, of course, is at odds with the leftist obsession of inclusion and zero-discrimination.

But what is relevant to the present article is the sad exaltation of a mere paragraph in one book to a status of “Hoppe in one lesson” in the eyes and demeanor of a certain subset of his internet fanbase. Adopting the trashy and anti-intellectual mannerisms of the worst of the deep-internet world, they have created a version of Hoppe and his contributions that do more to distance potential adopters than to attract them. This is what I mean by his memification. His entire body of works has been pushed to the side in preference for a single and only once-mentioned topic.

There is a type of internet-dwelling anti-leftist, which, despite their praiseworthy and correct stance against cultural and political egalitarianism and Progressivism, nevertheless act in a way completely at odds with the traditional, intellectual, civilized, and Western Man. Preferring controversy over enlightenment, shock-value over argumentation, and “triggering” people over communicating rationally and verbally (not to be confused with orally), they hamper rather than encourage the return of rationality in discourse and thinking.

I am not seeking here to criticize merely the existence of lighthearted memes and playful tomfoolery (ie Michael Malice handing Hoppe a toy helicopter), but rather the sustained memification of Hoppe by certain internet rabble rousers who by all appearances have never read much of Hoppe’s actual contributions, such as his critique of the socialism of conservatism. (Yet these same people drool over ridiculous images and think it hilarious-- when really its just childish and counter-productive-- to use a twist on 1488 HH, replacing with 14888 HHH [as in Hans-Hermann Hoppe]).

I’m reflecting on the fact that too many online "Hoppe fans" haven’t even read his work but like him merely because they can be edgy with him. This is, to me, a betrayal of Hoppean ideals. We need more people reading his works, not just creating clever Hoppe-Pinochet pictures.

But while Hoppe has been memified by this segment of the online anti-left, he stands for the opposite. His rhetorical precision and his laser sharp logic require his commentary on the world be in long, essay form. His speeches are prepared before hand and every sentence that he puts forth is meaningful and intentional. He seeks to engage in argumentation for the sake of truth, not merely annoying the admittedly obnoxious leftist mob. He aims to improve the ideas held by the proponents of liberty and to speak to the “remnant” who long for knowledge and intellectual development relating to the Ideal of Freedom.

Hans Hoppe is so much more than one paragraph, one phrase. He is an international treasure, a beacon of light in an intellectually dark world. What the world needs is reason, logic, rhetorical precision, and rationality.

The contributions of Hans Hoppe are essential, imperative, for a sound theory of liberty. Understanding the flaws of statism economically, ethically, and sociologically is a prerequisite for any hope of a future of freedom. The state thrives in social and intellectual chaos and Hoppean characteristics are the antidote to this. If one memifies and cheapens his message and image in pursuit of juvenile endeavors, the impact of his contributions will be lost. The salt, so to speak, will lose its flavor.