Five Myths of the Austrian View of Inflation and Business Cycle

By
CJay Engel
|
October 23, 2019
In the world of memes and rapid fire phrases, it's still important to understand the basic components of the theory we seek to propagate.
Economics

Five Myths of the Austrian View of Inflation and Business Cycle

In the world of memes and rapid fire phrases, it's still important to understand the basic components of the theory we seek to propagate. 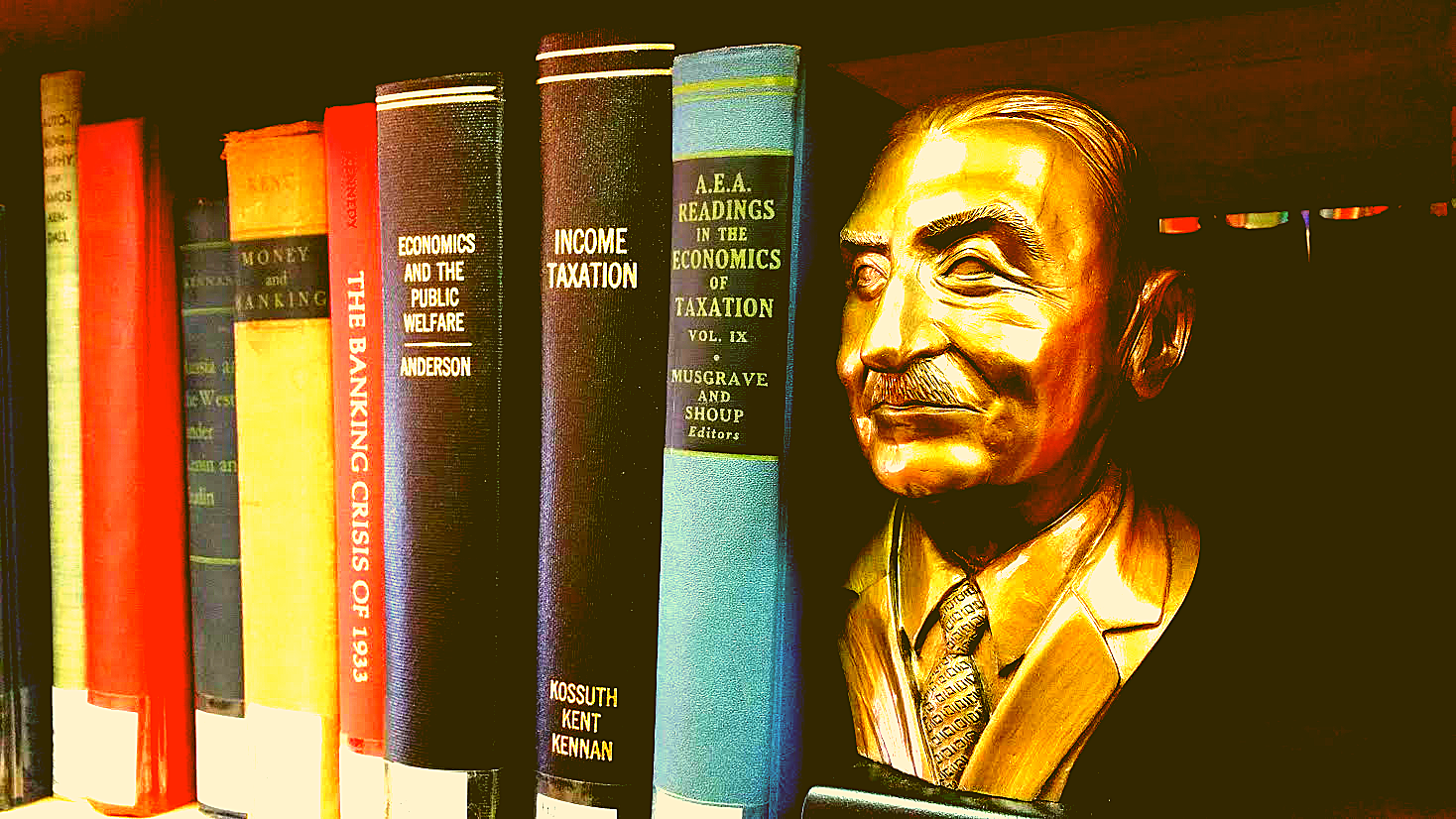 Some clarification is necessary regarding the Austrian view of inflation and the Boom-Bust cycle. Unfortunately, the Austrian view is often mischaracterized; sometimes by Keynesians and other economic Progressives, and other times by general critics of the Fed and those who purport to represent the Austrian view. I’ve picked a handful of them to address here.

First of all, it is obviously historically false that the creation of new money always causes consumer prices to rise. It was a point such as this that Rothbard felt important enough to counter in America’s Great Depression wherein he explained that the Austrian Business Cycle Theory (ABCT) can account for the lack of consumer price inflation during the monetary expansion of the 1920s. Rothbard here explains that monetary expansion can in fact coincide with increases in productivity such that what would have been a scenario of falling prices, turned out to be a flatlining of consumer price averages. That is, it is possible and allowed, under the ABCT, that the forces of falling prices happen at the same time as forces of rising prices so that there is roughly a wash.

Second, and more important for the integrity of the Austrian warnings of damage done to the economy, lies the fact that Austrians don’t (or shouldn’t) point solely to rising consumer prices as “proof” of coming problems. As I have stated in previous articles,

“rising consumer prices are by no means the primary evil of monetary expansion. The primary evil of monetary expansion under our money and banking system is the harm done to the capital structure. The artificial suppression of interest rates that results from the expansion of the money supply has an eroding effect on the economy’s capital stock. When interest rates are suppressed below what they would have been without the monetary expansion, investments in unprofitable projects suddenly appear to be profitable. This is the basis for the Austrian Theory of the Business Cycle. Capital is allocated to projects that the economy cannot in actuality support and is therefore squandered.”

Thirdly, it is more accurate to clarify that Austrians believe prices rise wherever new money flows. Sometimes this is consumer goods (the inflationary ’70s), other times, it is capital goods– which include stock/bond markets– (the late 1990s-the present). See my essay here.

Myth 2: Austrians teach that the creation of new money causes the business cycle.

This is a common one, but it technically misunderstands the Misesian view of the business cycle. In my amateur estimation, people misunderstand this point because they have not accurately grasped the Misesian taxonomy of money. In a lecture titled “Money, Credit, and the Business Cycle,” published in a Mises collection called The Free Market and Its Enemies: Pseudo-Science, Socialism, and Inflation, Mises writes:

The “trade cycle,” also known as the Business Cycle is a product, not merely of money creation, but money creation which appears first on the loan market. Only a falsified increase in loanable funds can affect the interest rate and it is precisely this tampering with the interest rate that encourages entrepreneurs to presume, against the reality of things, that there is enough savings in the economy to fund their production efforts.

The creation of new “dollars” (or whatever) that goes directly to consumer spending will not, other things being equal, lead to the business cycle.

Myth 3: Austrians teach that hyperinflation is the necessary endgame.

A proper understanding of the Austrian theory of the effects of money expansion leads one to understand that a contraction of the money supply is the eventual result of the initial money expansion. However, this is only true if the central bank lets the effects of its inflationary policy play out naturally; that is, if they let the free market correct the central bank’s interventions. If they do, boom turns to bust, the currency tends to appreciate and interest rates rise. Businesses realize losses, sometimes bankruptcy, and banks are unable to collect on their loans. If the boom is initiated by the suppression of interest rates and is characterized by malinvestment into capital goods industries, the bust is the undoing of all this.

However, in history, for various reasons including bad theory, political maneuvering, and reputation-protection, central bankers do not simply admit their mistakes and let the painful bust come to pass. But the only way to temporarily avoid the pain of a bust is to create more inflation (defined as monetary expansion). That is, they seek to solve the problem by doing the very thing that caused the problem in the first place.

Hyperinflation is not the necessary endgame because inflation is always a conscious choice by the monetary bureaucrats. Ultimately, only two things will stop the boom-bust cycle: either hyperinflation (a destruction of the currency) by choice or a painful (albeit healthy) bust which serves to liquidate bad debts and offer an opportunity to start afresh.

Myth 4: Austrians believe in an “overinvestment” theory of the business cycle.

This one is difficult to summarize succinctly, however it is mentioned here for the purposes of completeness: this was the primary misrepresentation in the academic community following the financial crisis. For further reading, although it is certainly not an easy read, Joe Salerno addressed this in “A Reformulation of Austrian Business Cycle Theory in Light of the Financial Crisis,” which was published in the Quarterly Journal of Austrian Economics.

In short, this misleading formulation of the Austrian Business Cycle theory originates in the work of Austrian Gottfried Haberler, who summarized the Austrian theory as one of sectoral shifts in which the loose monetary policy of the central bank initiates overinvestment in capital goods sectors and away from spending in consumer goods sectors. Salerno summarizes this characterization:

That is, during the boom there is a restriction of consumption, which coincides with overspending on capital goods. During the bust, this reverses and consumption spending picks up relatively, while capital goods investment suffers. Salerno again:

During the recession, spending on capital goods declines relative to spending on consumer goods. This represents a reversal of the change in relative spending streams that characterized the boom and initiates an adjustment process that re-establishes an optimal pattern of employment for labor and other resources that once again accords with the intertemporal consumption preferences and voluntary saving of market participants.

However as Salerno turns to critique, all of this neglects the role of

the entrepreneur, monetary calculation, uncertainty or expectations. In Haberler’s formulation, the cycle is driven exclusively by the relative swelling and contracting of current spending streams directed toward different sectors of the economy.

He continues to refer to this misleading version of the Austrian theory as the “hydraulic conception of ABCT.”

In the place of hydraulic theory, Salerno offers the true Misesian view as one of “malinvestment” rather than “overinvestment.” By doing this, he can make the case that, during the boom, there is both an increase of spending on capital goods (caused by the attractiveness of lower interest rates) and at the same time, overconsumption. That is, contra the hydraulic view, the true Austrian Theory anticipates malinvestment such that the overspending on capital goods happens at the same time as the overspending on consumption goods. This can only be “afforded” due to the increase in the money supply.

The problem here is that, as in the case of price levels, there are several causal factors operating on interest rates and in different directions. If the Fed expands the money supply, it does so by generating more bank reserves and thereby expanding the supply of bank credit and bank deposits. The expansion of credit necessarily means an increased supply in the credit market and hence a lowering of the price of credit, or the rate of interest. On the other : hand, if the Fed restricts the supply of credit and the growth of the money supply, this means that the supply in the credit market declines, and this should mean a rise in interest rates.

And this is precisely what happens in the first decade or two of chronic inflation. Fed expansion lowers interest rates; Fed tightening raises them. But after this period, the public and the market begin to catch on to what is happening. They begin to realize that inflation is chronic because of the systemic expansion of the money supply. When they realize this fact of life, they will also realize that inflation wipes out the creditor for the benefit of the debtor. Thus, if someone grants a loan at 5% for one year, and there is 7% inflation for that year, the creditor loses, not gains. He loses 2%, since he gets paid back in dollars that are now worth 7% less in purchasing power. Correspondingly, the debtor gains by inflation. As creditors begin to catch on, they place an inflation premium on the interest rate, and debtors will be willing to pay. Hence, in the long-run anything which fuels the expectations of inflation will raise inflation premiums on interest rates; and anything which dampens those expectations will lower those premiums. Therefore, a Fed tightening will now tend to dampen inflationary expectations and lower interest rates; a Fed expansion will whip up those expectations again and raise them. There are two, opposite causal chains at work. And so Fed expansion or contraction can either raise or lower interest rates, depending on which causal chain is stronger.

Which will be stronger? There is no way to know for sure. In the early decades of inflation, there is no inflation premium; in the later decades, such as we are now in, there is. The relative strength and reaction times depend on the subjective expectations of the public, and these cannot be forecast with certainty. And this is one reason why economic forecasts can never be made with certainty.