Foundations in Mises, Rothbard, and Hoppe

By
CJay Engel
|
October 23, 2019
A comparison of how each of these Austro Libertarian thinkers ultimately justifies the foundation for their case for liberty.
Political Theory

Foundations in Mises, Rothbard, and Hoppe

A comparison of how each of these Austro Libertarian thinkers ultimately justifies the foundation for their case for liberty. 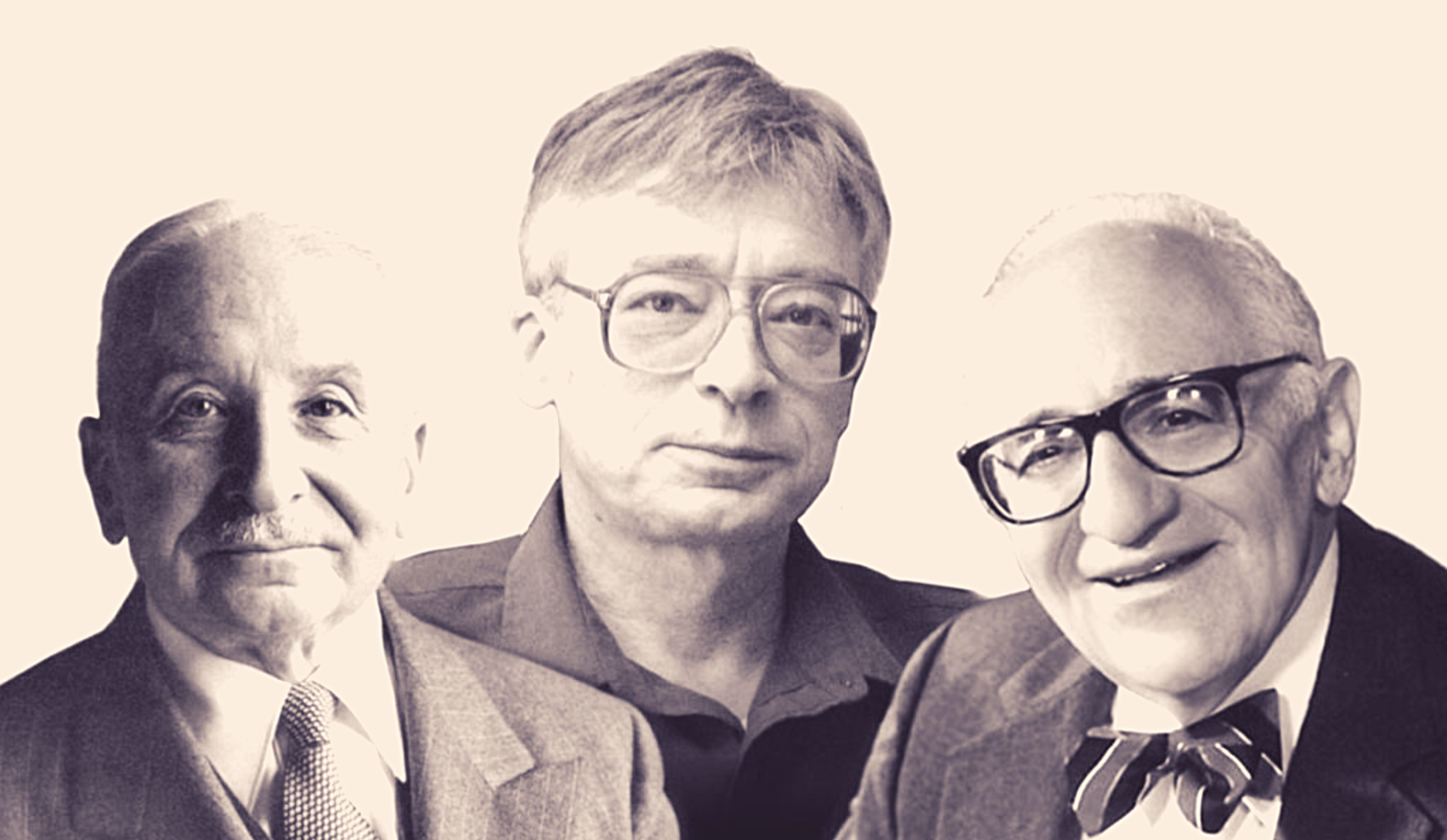 The following piece is intended to be a guide for understanding the slight differences between these three key proponents of the Austro Libertarian edifice. While all three of them are most certainly within the Austro-Libertarian fold, and in many ways are the chief developers of this framework, it is helpful to understand slight variations in their thought. Disagreement between them is a healthy and encouraging aspect of the doctrines they advanced.

The debate over the proper philosophical foundation for economics, ethics, and political theory (which, being focused on the justification for the use of force in society, is a particular application of ethics), are all grounded in the study of knowledge; or, epistemology.  This is why the first hundred pages or so of Ludwig von Mises’ treatise Human Action is pure epistemology; a dry subject, but nonetheless imperative.

Ideas which are to be argued and defended must have intellectual justification.  There is little point in engaging in argumentation if there is no justification for one’s position.  When we state that we subscribe to the Austrian School of economics, we are saying that we reject the empirical basis of other schools –whether they be Monetarism, Keynesianism, Marxism, Classicalism, etc. –and we embrace the rationalist or apriori basis of the Austrian School.

To be an Austrian economist is to accept that economic propositions are understood independent of experience and empirical observation. They are facts that must be learned by the employment of the laws of logic and do not depend on all the plethora of data and statistics and number-crunching of the majority of widely accepted economic schools of thought.  They cannot be falsified by empirical observation any more than any logical syllogism can be falsified.  No amount of testing and historical analysis can falsify the fact that 1+1=2.

The Foundations of Economic Theory

The starting point of the Austrian methodology is that “human beings act purposefully.”  From this, more propositions are deduced and derived.  Mises was the first to really hone in on this “axiom.”  However, Mises and Hoppe justify that starting point in a different way than does Rothbard.  Mises and Hoppe, being neo-Kantians, justify it rationalistically; that is, they consider that to deny this proposition is to affirm it.  For one cannot deny that humans act purposefully without acting purposefully. Therefore, this axiom is a result of the application of the laws of logic and is dependent on an a priori way of thinking.

In Economic Science and the Austrian Method, Hoppe writes (page 19):

What makes these [“synthetic a priori”] axioms self-evident? Kant answers, it is not because they are evident in a psychological sense, in which case we would be immediately aware of them. On the contrary, Kant insists, it is usually much more painstaking to discover such axioms than it is to discover some empirical truth such as that the leaves of trees are green. They are self-evident because one cannot deny their truth without self-contradiction; that is, in attempting to deny them one would actually implicitly admit their truth.

In all this, Mises follows Kant.

In slight distinction with Hoppe and Mises, Rothbard finds his epistemological roots in the empirical tradition of Thomas Aquinas. Thus, he considers the proposition that “human beings act purposefully” to be founded on experience, on observing both one’s self and other humans. In his essay “In Defense of ‘Extreme Apriorism,'” Rothbard explains the difference:

Whether we consider the Action Axiom “a priori” or “empirical” depends on our ultimate philosophical position. Professor Mises, in the neo-Kantian tradition, considers this axiom a law of thought and therefore a categorical truth a priori to all experience. My own epistemological position rests on Aristotle and St. Thomas rather than Kant, and hence I would interpret the proposition differently. I would consider the axiom a law of reality rather than a law of thought, and hence “empirical” rather than “a priori.”

The Foundations of Political Theory

In the realm of political theory and ethics, these three “Austro-libertarian” intellectual giants have a bit more diversity.  While Mises did not take libertarian principles as far as Rothbard and Hoppe (to anarcho-capitalism), they can all be seen as members of the libertarian tradition.  Mises’ case for a libertarian society was utilitarian.  The free-market system, for Mises, is so powerful and beneficial for mankind, that it alone must be demanded as compared to all other systems whether communistic, fascistic, interventionist, and their variations.

For the sake of prosperity and human flourishing, only a free society can achieve these ends.  Any government promises to act in the place of the free society in pursuit of a better world, can be proven as impossible based on economic theory.  And in all his statements about the benefits of the free market and capitalism, Mises was right.

[Mises] favors life over death, health over sickness, abundance over poverty. And insofar as such ends, in particular the goal of achieving the highest possible standard of living for everyone, are indeed shared by other people, as he assumes they generally are, as an economic scientist Mises recommends that the correct course of action to choose is a policy of laissez faire. And doubtlessly, insofar as economics can say this much, the case for laissez faire is a highly important one.

However, what if people do not consider prosperity to be their ultimate goal? As Rothbard points out, economic analysis only establishes that laissez faire will lead to higher standards of living in the long run. In the long run, however, one will be dead. Why then would it not be quite reasonable for a person to argue that while one perfectly agreed with everything economics had to say, one was still more concerned about one’s welfare in the short run and there, clearly for no economist to deny, a privilege or a subsidy would be the nicest thing?

Moreover, why should social welfare in the long run be one’s first concern at all? Couldn’t people advocate poverty, either as an ultimate value in itself or as a means of bringing about some other ultimate value such as equality?

In other words, argues Hoppe, Mises is to be commended by showing the potential of the free market and its results.  But why are the results good?  Economics does not establish what is right and wrong.  Powerful and rich and tyrants have no reason to desire the prosperity for many that the capitalistic and free markets produce.  Mises however, denied that ethical propositions could be rationally defended.  His utilitarianism was the only thing that he was left with.

Rothbard rejected his master’s Utilitarianism. We ought to hold him in high esteem for the simple fact that he had the courage to reject the relativistic solutions of so many in the present age.  Mises was certainly not a cultural relativist, and in fact was a defender of Old World mannerisms, behavior, and social respectability, but these things came from his Austrian heritage and not from any justification via pure reason.

In dissenting from utilitarianism, Rothbard sought a transcendent ethic that was binding on all people at all times. Rothbard’s Natural Law libertarianism was built on the normative propositions surrounding the fact that man has ownership in his body and external property. Ownership entails that the owner has the exclusive right to determine the use of the property in question. The nature of this ownership is such that use of the property by a non-owner is ethically wrong. Thus, man is free to use his property in accordance with his desires by virtue of the fact that no one has the moral authority to prevent such use. The implication of this, of course, is that the boundary of man’s use of his own property is the property rights of those in society. Thus, for Rothbard, the property-rights social order was of an ethical nature, not a utilitarian one.

Hoppe however, being a strict apriorist, rejects both Rothbard’s Natural Law empiricism as well as Mises’ utilitarianism.  His view is that libertarian theory ought to be defended with the very same methodology as his Austrian theory.  This is important.  And when he first introduced this idea, it was hotly contested and quite controversial in libertarian circles.  If Mises was a Utilitarian and Rothbard a Thomist, Hoppe has made the praxeological case for a private property order.

It is his contention that the goal of political theory to provide norms which prevent conflict. Without the possibility of conflict, there is no need for a political theory.  But conflict exists in a world of scarce resources and therefore property assignment rules are to be demanded. In order for one to justify any of these rules, that is, in order to put forth an argument in defense of a political theory, one must presuppose self-ownership.  One must assume at the outset that he owns the body through which he (man is spirit, not body) communicates and justifies his position.

Thus, Hoppe finds the same logical potential here as in his justification for the economic “Action axiom” described above.  For if one seeks to deny that humans have ownership over their bodies, but in engaging in argument in order to deny this they exercise or prove this belief, they would only be contradicting their presuppositions.  Thus, for Hoppe, any political theory except the libertarian one is a contradictory theory.

To be clear, this is not a statement of “ought.”  It does not purport to explain why it might be wrong for someone to steal or murder, only that those things cannot be rationally justified.  He has sought to avoid the is-ought problem of philosophy altogether.  No political order can be rationally defended except the Austro-libertarian one without falling into self-contradiction.

But, the critic may wonder, why is it bad to contradict oneself? Surely the criminal or politician (but I repeat myself) cares not one wit for the laws of logic.  And Hoppe recognizes this critique.  His answer however, is that he is only concerned with what can be rationally defended. To the extent that the philosopher prefers being rational over irrational, to that extent the private property principles is to be extended in every case, starting, of course, with one’s property right over the body.

This implies, it should go without saying, that he takes the Augustinian view of man, where man is his mind, not his body– but his body is his possession, and no one else.

The Austro-libertarian property rights theory and the Austrian School economic theory need an epistemological foundation.  The great debate is what, exactly, that foundation is. Studying the distinctions within the Austro-Libertarian world is a rewarding and illuminating effort.