By
CJay Engel
|
January 13, 2020
It is equally important to find both good things to defend, and to defend them with character.
Society and Culture

It is equally important to find both good things to defend, and to defend them with character. 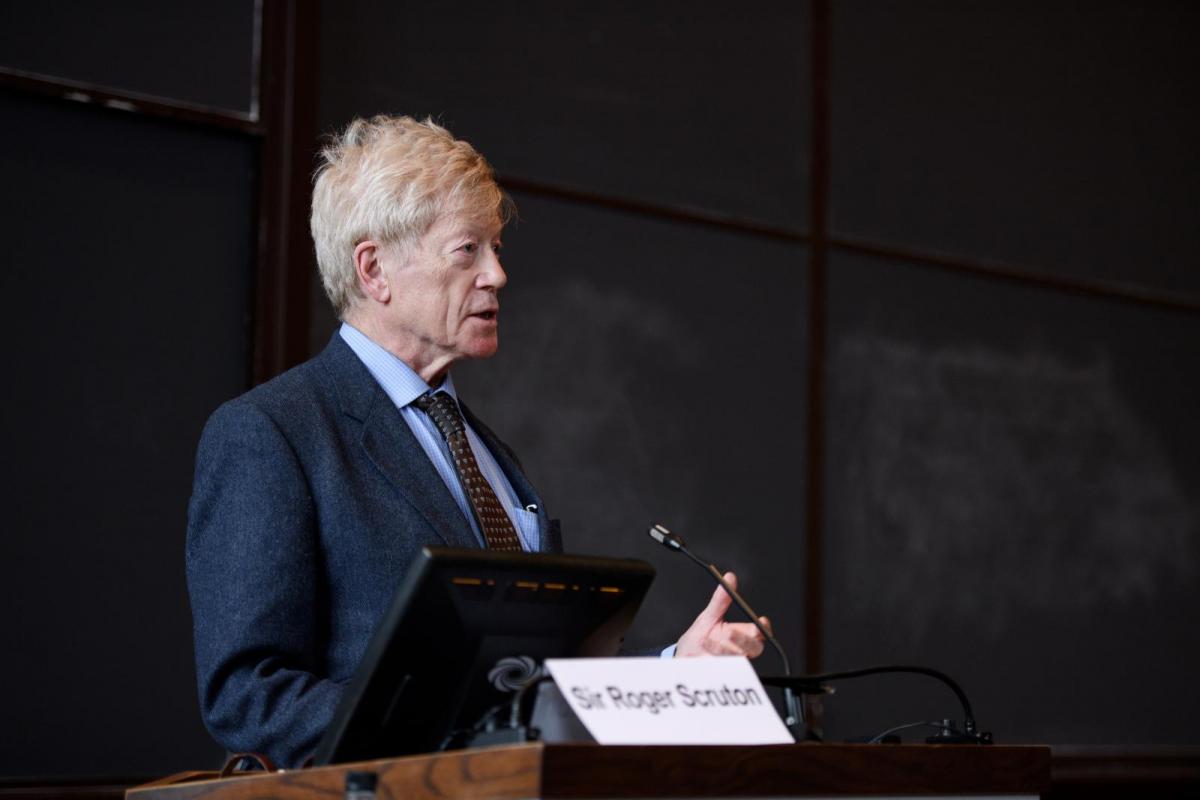 Roger Scruton has left the world behind at the moment of my own present series of intellectual developments. This means that there is already much on my mind relating to his contributions and the way that he thought about the world, cultural and political.

Roger Scruton seemed to have had an air about him that captured a lost essence of honor and chivalrous reservation; he appeared to care deeply not only about the vitality of a healthy intellectual and sentimental life, but also a care to portray a sense of dignity and nobility in the face of a world that, in so many ways, has proven to be an institutionalized repudiation of these elements of his character.

Having only recently discovered his writings, distracted as I was by an unhealthy obsession with the delicate technicalities of libertarianism over the last decade, I have found in him a certain refuge from what he calls the “cult of ugliness” that pervades our modern world. For Scruton, civilization is not a given; it was not handed to us by gods, nor did it always exist into the eternal past. It is rather an earned product of an immense time-canvas of peoples, customs, liberties, laws, religion, legend, heritage, social memories, language, and a complex series of bonds between mankind, both living and dead.

And yet, also for Scruton, the present West is such that it has fallen for the alluring promises of materialism as a way of life, notions of ongoing social upheaval, and the rejection of anything transcending the ego that could unite peoples in various ways.

What strikes those who read Scruton is that he had a firm grasp on what was at stake under the cultural regime of modern left-liberalism. There seemed to be a deeply rooted grasp of the achievements of the Western world over the last fifteen hundred years and the devastating costs of modern man’s sheer ignorance and agnosticism regarding his own heritage. There are quite a number of important angles to this heritage: some of them ethnic and familial, some of them intellectual; some of them aesthetic and sentimental, some of them religious; still others were related to the development of art, music, and architecture—all of which he wrote on; and there were even elements of this heritage that were legal, political, and economic.

Can modern man survive in a state of rebellion from his heritage? Are there no consequences in man severing himself from his roots?

One of the most memorable characteristics possessed by Scruton was that, despite his negative answer to these two questions, he sought to live out the type of dignified image he urged his fellow Englishmen and women to recover in an age of mockery and boorish behavior. That is to say, it is not merely the fight for seemingly lost causes that matters, it is also the dignity and honorability of the fighter. Scruton therefore lived his life not merely in pursuit of a return to the past, but with hope of a future. For hope requires praxis, not mere historical investigation. The dignified man is always hopeful; despair is a fruit of decadence.

More importantly, it is a fruit of an impersonal-deterministic view of history, combined with a debased materialism that gives no legitimacy to a surviving social spirit that can outlast the life of the individual. To reject this materialistic individualism, therefore, moves one to live as an example for those who come behind.

Taking up this understanding of the world, one might find a similar lesson in the words of American southern conservative Richard Weaver:

I am now further convinced that there is something to be said in general for studying the history of a lost cause. Perhaps our education would be more humane in result if everyone were required to gain an intimate acquaintance with some coherent ideal that failed in the effort to maintain itself. It need not be a cause which was settled by war; there are causes in the social, political, and ecclesiastical worlds which would serve very well.

In a world where those of us interested in preserving, perhaps even recovering (if we are hopeful, which it is tempting not to be), the good in our own civilization, it is often retorted against us that we “are not on the side of history.” We who are conservative by sentiment and demeanor are often asked, though not asked nicely, to give up our attachment to the past; we must submit to the long march of history, the march of progress. This progress, of course, is largely said to have started in the enlightenment, for the thousand years previous were Chaos and Old Night.

Under the peculiar flavor of this opposition narrative, Weaver understands the importance of being renewed by the study of lost causes. Many of these causes, as he indicates, are “social, political, and ecclesiastical.” Weaver, ever so wise, elaborates:

But it is good for everyone to ally himself at one time with the defeated and to look at the “progress” of history through the eyes of those who were left behind. I cannot think of a better way to counteract the stultifying “Whig” theory of history, with its bland assumption that every cause which has won has deserved to win, a kind of pragmatic debasement of the older providential theory. The study and appreciation of a lost cause have some effect of turning history into philosophy.

In sufficient number of cases to make us humble, we discover good points in the cause which time has erased, just as one often learns more from the slain hero of a tragedy than from some brassy Fortinbras who comes in at the end to announce the victory and proclaim the future disposition of affairs. It would be perverse to say that this is so of every historical defeat, but there is enough analogy to make it a sober consideration.

Not only Oxford, therefore, but every university ought to be to some extent “the home of lost causes and impossible loyalties.” It ought to preserve the memory of these with a certain discriminating measure of honor, trying to keep alive what was good in them and opposing the pragmatic verdict of the world.”

In reflecting on the contributions both of Roger Scruton (a defender of Old England) and Richard Weaver (a defender of the Old American South), two cultures with obvious distinctions and similarities, one finds a duel recognition of the importance of elucidating certain lost causes. The point of observing and understanding lost causes is not to march backward through time, to reinstate what cannot be realistically obtained, but rather to bring to mind a sense of ascendency in terms of what matters more than the immediate.

Or, as Edmund Burke once noted, “People will not look forward to posterity, who never look backward to their ancestors.

If we reject, as Weaver urges us to, the presumption that the verdict of history determines the goodness or evil of causes lost to the sands of time, we may find ourselves compelled to defend with dignity, as Roger Scruton did, the lost causes of our own time.

The reason for this is that there is a distinction between the particularities of a cause and the eternality of the cause. To draw upon the lessons of those causes that were lost to time is not to seek reinstatement of the elements of particularity, but to discover the principles which must be applied particularly in the present and ever-developing future.

One finds in Scruton a man of deep and reflective conviction that the future stands athwart the present generation, pleading with all who will listen, that preservation is a duty. This preservation is not the enemy of change, but it does offer sanity to a world saturated in drooling obsession with sustained upheaval as a way of life. All throughout the West, frustration is stirring and agitation is rising.

But the duty of preservation of old causes is not agnostic to the character of man. Scruton showed an increasingly anxious world how to live with a sense of honor and decency, rooted in the transcendent. If modern man does nothing else for those that come after, this will be a great contribution. Living and dying well are themselves basic to the preservation of the good.